A South Yorkshire lorry driver and a hi-tech safety guru are urging Barnsley Labour MP Dan Jarvis and the leader of a local council to support roll out of ‘London law’ nationwide in a bid to prevent cyclists dying or HGV drivers being prosecuted.

Steven Senior, a long-distance lorry driver for 35 years and Managing Director of Barnsley-based S&J Transport (Yorkshire) Ltd, was speaking in the wake of new Highway Code changes that have shifted the ‘safety’ balance in favour of cyclists and pedestrians.

The move means drivers are now more vulnerable to prosecution if they inadvertently ‘turn left’ and strike a cyclist they were unable to see on their nearside, resulting in a fatality or serious injury as the burden of proof now falls on the driver.

“Bike riders and pedestrians now have more road rights than ever before and the legal onus to ‘notice’ their presence has shifted to lorry drivers. If they fail to do so, turn and tragedy strikes, then the HGV driver risks life-changing prosecution unless they can evidence to a court, that it was not their fault,” said Mr Senior.

Most lorries have blind spots meaning their vehicles are not ‘designed’ to support the legislation’s new demands, unless drivers have special cab fitted kits which feature a series of visual and audio aids designed to eradicate ‘blind spots’ by giving drivers ‘whole vehicle’ vision.

“I have already fitted the industry-standard ‘HALO Kit’ system to my fleet of 12 trucks providing not only better ‘vision’ for my drivers, but also greater protection for those cyclists travelling in close proximity to my vehicles”, added Mr Senior.

“Why on earth this ‘standard’ should be confined to London I don’t know, so I want our local Labour MP Dan Jarvis and the leader of Barnsley Council, Sir Stephen Geoffrey, to support my calls and lobby for a roll out of what is currently ‘London Law’, nationwide. It needs to happen for safety’s sake.” 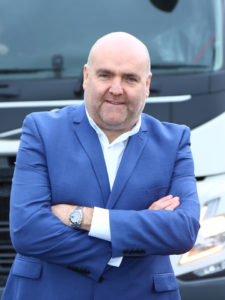 Steve MacDonald, Managing Director of Leeds, West Yorkshire based SMUK and inventor of the industry standard ‘HALO Kit’ system – already fitted to thousands of vehicles across the UK – said: “In London the ‘Direct Vision Standard’ is already operating.

It is a one to five star-rating system – determining how ‘visually safe’ a lorry is – and is administered by Transport for London.

It is already playing a key part in protecting both drivers and cyclists.

However, it is only operational within the M25 and, ironically, there is a £500 fine for drivers entering the Capital without a special permit or a minimum one-star vehicle safety rating. This seems like madness. Why not just mandate the legislation UK wide? We wholeheartedly support Steven Senior’s campaign.

‘HALO Kit’ is a comprehensive lifesaving system that include cameras, lights, sensors, audible alerts and a 4G recording facility that warns the HGV driver that there is a vulnerable road user in his blind spot, thus reducing or prevention a fatal collision.

Alina Tuerk, Strategy and Planning Manager at Transport for London (TfL), said: “Our ideal outcome would be that as schemes get introduced at national and an international level, those schemes eventually converge with the London base scheme”.